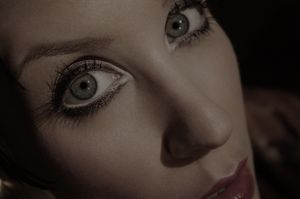 “I discovered the book The Mysterious World by Francis Hitching when I was a child and when I first opened it, there was a picture of spontaneous human combustion. I had never heard of such a thing in my life.
There’s that wonderful old photograph of Dr. John Irving Bentley who suddenly burst into flame. There’s a bit of his leg, with his foot still in a slipper, his walker, and cinders everywhere.


And I’d read about toads and frogs and blood raining from the sky.
Or Count Saint Germain, who was recorded to have lived for hundreds of years. He said his secret to immortality was to eat oatmeal and wear velvet encrusted with gemstones. To this day, no one knows exactly who he was, where he came from and if indeed he was immortal…

We all want to believe in magic. It keeps hope alive. Sometimes I feel that magic and the suspension of disbelief is the only thing that matters. That’s why my music resonates with listeners on such a deep level.

I feel I need to be a beacon for people, and allow them into the swampy place in their souls where the sinister and sensual meet. Peel away the layers of comfort and convention we hide behind. I find it fascinating to delve into those places and take an audience with me.

It’s the breath, the spaces between the notes and the arrangements that make the music come alive.
The Soul lives in the Silence.
It’s a process of fully inhabiting that quiet moment– allowing the flame, the way in.

I live to honor the Mystery.

Unfortunately, these days of internet, technology and social media have murdered the allure of mystery. That breaks my heart.
Monsters, marvels, lore, and legend—these are the things that make us feel most alive.
The most wonderful questions of all are the ones for which there are no answers.

One of my favorite quotes is: “In the end, it is the mystery that prevails, never the explanation.”
Sadly, the world has gotten to a point where everyone’s in a rush for instant gratification, demanding an explanation, collecting like flies upon the next meaningless fad. But after the fact, they’re still bored, depressed and unfulfilled.

It’s my purpose to perpetuate the long-lost magic, allow people to slip into the cracks, to pry up the floorboards and search deeply within themselves.
It’s vital to hold on to that childlike sense of marvel.”